How many people have been here before?

This has been a public service announcement.

It’s exam period here in Sheffield, and after a pretty intensive session in the library, I was exhausted, malnourished, and dealing with a pretty hefty case of scurvy. Like any responsible member of the student body, conscious of the way my pirate-esque health would affect my studies, I headed to Sainsbury’s hoping to pick up everything I needed for a delicious, nutritious tea.

Little did I know, that night I would dine on sorrow.

If you live in Britain, I’m sure you can imagine what horror met my eyes: in the supermarket was nothing shortage of carnage. When I headed to the fruit ‘n’ veg aisle, the usually technocolour dreamcoat of vegetables was threadbare, to say the least. There was no broccoli, not even a little tomato, and, worst of all, not a single courgette to be seen.

That might not sound so bad to you, who presumably eats a wide variety of fruits and vegetables, but for me, a 20-year-old supremely stuck in her ways, courgettes are a necessity. My average shopping list looks something like

I eat them diced with fusilli or chopped with spaghetti. When I’m feeling fancy I throw on some tunes and slice them up with a little tagliatelle. Once I even cut out the middle man and experimented with a spiraliser, with mixed results.

I love courgettes. I love the way they taste fried with garlic, or baked with paprika sprinkled over them… They have that special quality of assimilating the taste of anything you put near them. When you fry them with some bacon, they taste meaty; with spices they’re a journey to the East; once, I put one next to some Cheddar in the fridge, and, I swear, it tasted cheesy.

I love that you don’t have to pick out seeds or avoid a pit: you could just chop three times and fry ’em up if you wanted. You can all but eat them raw like a banana.

I mean, I even love how they look – that dark green skin covering the pale insides, the little stalk on top like a nozzle. I think the way they disguise themselves as cucumbers is magnificent.

Anyway, I’m sure you can imagine my consternation: instead of the usual three-pack of courgettes very reasonably priced at £1.10, I was faced with an empty box. Even the loose suspects I normally avoided for reasons of scuzziness were conspicuously missing.

I panicked. I bought a packet of peppers (even though there was a clearly inferior green one) and ran home, head full of potential courgette alternatives (isn’t a cucumber basically the same thing anyway? I mean, it looks the same.)

Once home, I was able to calm down a little. The first thing to do was to see what on Earth was going on, and, if at all possible, write a Very Stiff Letter (V.S.P.) to Someone in Charge (S.i.C.).

I set out imagining that the Regional Manager of my local Sainsbury’s Local had made a pretty big error. To my surprise, however, this horror was not localised: a cursory Google showed me that I wasn’t the only person freaking out about losing access to the good old zucchini. 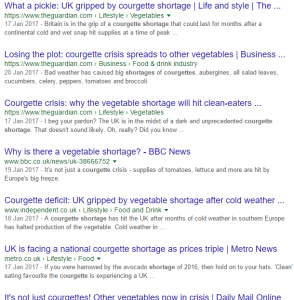 As you can see, the Internet is practically inundated by articles explaining this dilemma – and the forecast isn’t exactly good.

(By the way, if you, like me, were shocked at the Guardian’s sloppiness in suggesting pickles are made from courgettes, I did a little digging and you can set your mind at rest. Turns out you can pickle anything you want.)

So what does this mean for you and I, the consumer, the person relying on that supply of cheap, versatile vegetables?

Well, for one thing, it means we’re gonna have to rethink our meals for this week.

But my own selfish interests aside, I was pretty intrigued by this whole situation. What had caused this sudden deficit? I had a sneaking suspicion this whole event was going to venture into the flavoursome, so to speak.

Sure enough, according to BBC News, the shortage has been caused by “a combination of flooding, cold weather and poor light levels“. These conditions have created unfavourable growing conditions, and the UK, which imports the majority of its five-a-day, has been particularly affected.

For now, it seems the best thing to do is buckle down, buy squashes and marrows, and turn to credible sources for advice on how to combat climate change.

Some sources that seem credible:

This site uses Akismet to reduce spam. Learn how your comment data is processed.