How many people have been here before?

This has been a public service announcement.

I stopped eating meat recently, and it’s been harder than I thought. Not because I’ve been craving steak (although, I’ll be honest, I have been thinking about pork belly since day one); but simply because loads of stuff I’d assumed was vegetarian just isn’t.

(Also, I’m living in Prague and sometimes I’ve ordered meat dishes because my Czech is awful. Eg I was pretty sure šunka meant something like artichoke, but it turned out it was ham. I was left feeling doubly bad because 1. I ate pork and 2. I was faced with the reality of how badly I speak Czech.)

In an act of charity and friendship, I’ve compiled the following short list of things you might not know contain meat:

Hard cheeses quite often contain, and this is a technical term so I hope I spell it right, gunk from cows’ tummies. I don’t really know what this adds to the cheese – I read that it’s sought after because it’s an enzyme, but the only thing I remember from secondary school biology lessons is how to put a condom on a banana (although, crucially, I have forgotten why).

May contain crushed up bugs. If they’re not included in production, they will be after you’ve ridden your bike really fast down a big hill.

This time two months ago, my greatest joys in life were pies and pints. Now both have been cruelly ripped away from me.

I don’t wanna talk about it, OK?

OK, obviously chicken soup contains chicken, but some tinned vegetable soups are made with meat stock. And why? Because animals are so much tastier than fucking carrots.

So yeah, be careful in restaurants and when buying premade soup, and, remember, if you’re surprised by how much you enjoyed that leek and potato, it’s probably because someone slipped some chicken in there. 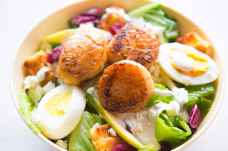 This is possibly the most shocking of the entire bunch. OK, now I think about it, I guess it makes sense that scallops are creatures, but it never occurred to me. If someone had asked me how we get scallops, I would’ve said they were a kind of fungus or, possibly, a substance no one knows the providence of, like unicorn tears or tofu.

(By the way, I found that picture by Googling scallops, but for all I know they could be cat eggs. I’m still not 100% on what they look like.)

So yeah, it turns out scallops are seafood. Avoid.

I’m not sure about this but I reckon they contain actual bears. How else could they look so realistic? 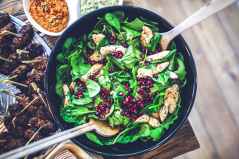 In an admirable attempt to make salads less miserable, some food producers will enhance their sauces with bacon. Caesar dressing, specifically, is often made with those miniature fish that manage to contain the flavour of an entire aquarium in their tiny bodies.

One thought on “Things you didn’t know contained meat”

This site uses Akismet to reduce spam. Learn how your comment data is processed.